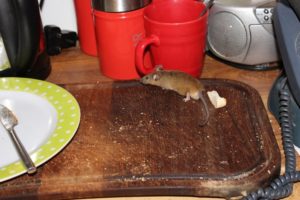 Often the customers that are most concerned about pest problems at home are those with vulnerable members of the family such as young children, the elderly or the sick. While the health risks of pest infestation are very real for everybody, they are increased for those whose condition is already fragile. When we were called out for a job of mouse control in Leytonstone, these issues were clearly illustrated.
The family home we arrived at was quite a large property, over three floors. Several generations of the family lived there together, ranging from grandparents, the oldest of whom was 89, to toddlers of whom the youngest was 2 and a half. One of the grandparents also suffered with various heart and lung conditions and had to be connected to a ventilator, meaning they were receiving oxygen via plastic tubes.
When the residents discovered they had a mouse problem they were naturally horrified. In addition to all the usual health concerns of faeces on the floor and the spread of disease, there was danger that mouse could gnaw through or otherwise damage the ventilator tubes, and eventuality that could prove fatal for their elderly relative.
Acknowledging the urgency of the situation we set to work immediately and used a variety of techniques to combat the infestation. We set traps and poison, blocked entry points and ensured any food sources for the animals were kept out of their reach. Fortunately we were able to solve the problem within a couple of days, allowing our customers to return to their lives with peace of mind.